Marcos is an Argentine artist based between Paris and Brussels. He trained in contemporary dance at the National University of Arts in Buenos Aires, and then graduated as a physical performer at the School of Physical Theater of Buenos Aires (ETBA). Afterwards, he followed the professional training of dancers in Paris at the CND (Centre National de la Danse). After obtaining a degree in dance at the University of Paris 8, he continued his training as a choreographer in Brussels and passed the Certificate of Choreographic Practices of Charleroi-Danse, in partnership with La Cambre and INSAS.

More recently, he participated in Boris Charmatz’ La Tempête project at the Grand Palais in Paris. Marcos is part of M18, an original proposal for Ravel’s Bolero based on Béjart’s choreographic version and a project by choreographer Stéphanie Auberville, in partnership with Danscentrumjette and Charleroi danse.

A dancer imbued with the urban culture of voguing, Marcos’ research work is articulated between performance, physical theater and dance, always with a view to making political claims.

As a choreographer, he developed three pieces in three countries of residence: Agua in 2016 and Hors de moi in 2018, an adaptation of the book of the same name by contemporary philosopher Claire Marin. It is with CRUCE, his latest creation, that Marcos joins the selection of G.INCUBATOR 2021. 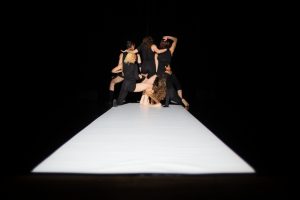