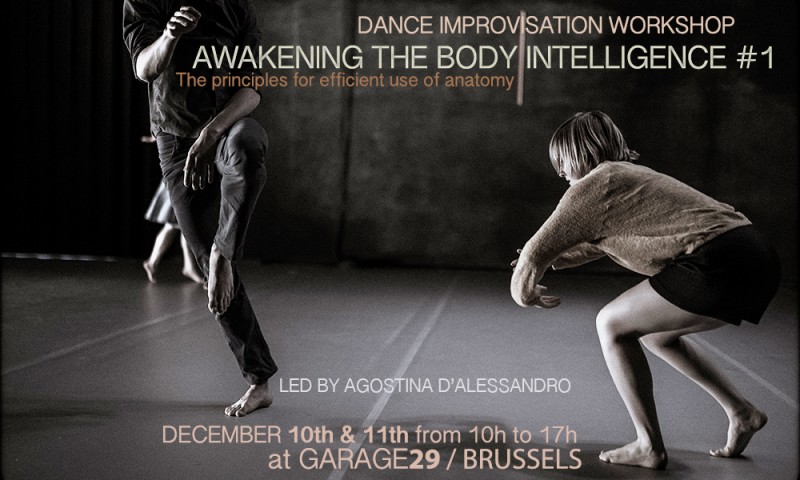 This workshop is a two days fully immersion in the exploration of the body anatomy, making use of this inner capacities and how to increase them.

As professionals dancers we have an enormous amount of knowledge being accumulated in our bodies. Using a very specific method we will awake this abilities and work on integrate them in our dance vocabulary, discovering and increasing the full potential of our creativity.

The first part of the day we will work on warm up the body (and the mind) by a deep manipulation. This manipulation is always orientated trough two basic principles: to open and release the body in order to let the movement organically become “virtuosity”.

The second part of the day will be use to explore some essentials physical principles as weight and alignment in order to “follow the movement that is being done” instead of making it. Then we will integrate this body quality into the instantaneous composition creating small group pieces.

The proposition of this workshop is orientated to professional dancers, circus artist, actors and performers. To all people that want to deeply research the principles for efficient use of anatomy.

Agostina d’Alessandro is a contemporary dancer, improvisor, teacher and choreographer. In Europe she has worked with Julyen Hamilton Company- Allen’s Line  since 2009 until now, performing the pieces “Sand & Vision” (Brussels), “LOCAL TALK” (Paris/Bruxelles & Strasbourg-IMPREVU Festival, “LE VOYAGE” (Paris & Bruxelles) & “THE ARRIVAL” (Bruxelles). Between 2005-2011 she works with T.R.A.S.H Company (Holland) in the following productions: PORK-IN-LOOP & ZOFIA performing in Hollande, Belgium, Spain & France; she participate in severals projects as : Les Ballet du Grand Maghreb, By Ana Stegnar & Saïd Gharbi, SUPERAMAS; Koshro Adibi IPL (International Performers Laboratory) and studied with severals companys: Ultima Vez, Isabella Soupart, Troubleyn Jan Fabre (Franz Marijnen), David Zambrano, Julyen Hamilton amongst others. For her first dance piece “S-Main Gaushe” (2004), she has obtained the support of the “Mairie de Paris” and toured it to various dance festivals. In 2012 she created DEMIURGO a dance performance improvisation piece who has premier in Buenos Aires at LEM & in PUENTES Festival at Bruxelles. As coreographer she also works in “La Loterie Erotique de Demoiselles” by Brigitte Bailleux and “Un cadavre dans l’oeil” by Guy Theunissen – 2014/2015. Since 2011 she teaches Improvisation & Composition at the Royal Dance Conservatory of Antwerpen. In 2013-2015 she made performances as: RELOAD IN MOTION & ZÔGRAPHOS (2013), Suggested Emotions & VIRTUS (2014) and SYNCHRONICITY, Evoked Potential (2015), Abstract Entity (2015), Mine Is Yours (2016).She is also a founding member of SoloConversations Dance Collective that just finished its second piece: The Grave Is Yawning (Mars 2016). She has taught workshops of release technique and improvisation for performance in Belgium, Mexico, Holland, Argentina, Croatia and Spain.