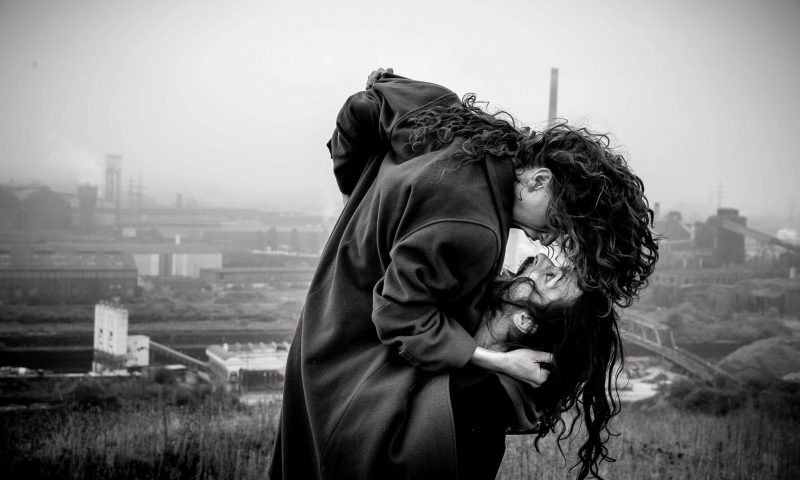 This season, a series of workshops with public presentation are offered to the community of dancers. A hybrid formula allowing choreographers to experience directing and working with a group of professional scenic artists invited to experiment a creative process leading to a public presentation.

On the other hand, the young dancers are invited to work on their ability to adapt to a choreographer’s proposal over a short period of time, experiment a creative process leading to a public presentation and to make themselves known to emerging choreographers.

For the last three years, under our company MY HOMELESS LOVER, we have been touring our piece, PASTA E LAVA, and have been teaching our partnering class OUIJA, which focuses on empathic awareness and deep listening in partnering. Aspects of our class/workshops have elements of set material within an open/improvisational structure allowing participants to train both proper response as well as quick decision making. By the end of the two weeks we will bring these ideas to performance level while simultaneously developing a larger group work.

Daily practice:
Every morning, we will hone skills needed for deep listening and empathic awareness. The class offers guidance on joining a journey, manipulation in solidarity, and practicing leadership exchange through improvisation. The main goal is to help free the mind to be available and to make quick reactions/decisions, but also to help understand how our bodies are sensitive instruments that can receive and render subtle information. It is part of our philosophy to empower the movers to be both involved in generating material as well as making decisions ‘in the moment’ that are in relation to their surroundings and their instincts. Mistakes will happen, so we train how to transform them into opportunities while we’re still falling, while we’re off balance.

Week 1:
In the first week, the afternoons will primarily be devoted to participants generating new material and action as well as sharing some of our set material. These includes, but not limited to:
TORNADO – based on action/reaction, instinct and is designed to develop awareness and to practice a cause-and-effect relationship with a partners in a fast-paced, ever changing swirl of movement.
MOVING WALL – adds a wall as a stationary partner to a duet or trio. The task is to try to stay ‘in contact’ at all times. The purpose is to open awareness and creativity to the space around and ‘taking care’ of the partners given a set of task to aid in movement development.
SQUARES – Structured in three phases, this activity practices the skill of proposing and responding and studies to quickly ‘set a scene’ together. We stress clarity of decision, letting the movement create the drama/story, and starting from and maintaining simplicity throughout the scene. We give a clear framework and guidance, but also allow space for experimentation and breaking of rules.
THE PEACOCK: a set of partnering material that we have developed, but put into a sort of “choose your own adventure” structure. There are rules to create stillness, movement bridges, and structure to keep partnerships ever flowing, but much of the decision making is left for the moment and up to the movers.

Week 2:
Daily morning partnering classes continue. Afternoons devoted to refining, organizing and arranging the generated material and action developed from the first week. There will be a showing on the final day of the two weeks.

Selection on CV and a video of max 1 minute.

Obligation to participate for the whole workshop.

This workshop-creation is addressed to professional artists of the performing arts.

Send your application before September the 1st at contact@garage29-offestival.be

Participants will be refunded in the case of event cancellation due to government restrictions in response to the COVID19 situation.

Eddie, born in Hawaii, performed Ultima Vez for nearly six years, having toured and performed primarily with What the Body Does not Remember and In Spite of Wishing and Wanting. Eddie is currently working with Emanuel Gat Dance (since 2017) and touring WORKS, STORY WATER and in creation for LOVETRAIN2020. His experience also spans Creach/Company, Shapiro & Smith, ARENA Dances, Zenon, Andrea Miller, and Roberto Olivan. He was a founding mover and continues as an Artistic Associate for company Black Label Movement in Minneapolis.

As a choreographer, Eddie has been making work professionally since 2008. More recently, he had collaborative works presented at American Dance Festival (2014), Zürich Tanzt (2015), a solo at P12 Space, Brussels(2016), premiered a duet at Dag van de Dans (2017), and a new trio as part of The Guest Project in Thessaloniki(2018). Since the beginning of 2018, his new work has been housed in his company My Homeless Lover, which he co-directs with Jessica Eirado Enes. Currently, they are internationally touring their work, PASTA E LAVA.

Jessica was born in Italy, now based in Brussels and working as a freelance dancer/choreographer. Jessica is currently working with Alexander Vantournhout and touring the work Screws throughout Europe. In 2018, Jessica worked with Belgian company Zemiata, directed by Youri De Gussem. In 2017, Jessica was part of the production Requiem for Aleppo by Jason Mabana, which premiered at Sadler’s Wells followed by a European tour.  Jessica also danced in several works of Compagnia Petranura Danza and Annamaria Ajmone.

Jessica is co-founder and co-artistic director of company My Homeless Lover with Eddie Oroyan. They are currently touring their full evening length work, PASTA E LAVA, which premiered in Genova in November 2018. She is teaching partnering workshops throughout Europe and USA and creating a new performance that will premiere in 2021. She was also part of a collective of women, including Marika Meoli and Iro Grigoriadi, that created a 40 minute work, called È Vietato il Gioco Della Palla, supported by Ursino Buskers Festival 2017.