Diego Echegoyen (Buenos Aires, 1981) is a performing artist, based in Brussels, who works, researches and activates in projects merging theater, expanded choreography, field recording, site-specific and street performance.
He graduated at the Institut Superieur des Arts et Choreographies at the Academie Royale des Beaux-Arts de Bruxelles in plastic, visual and space arts in Urban Space and holds a post-master degree in performance and scenography of APASS within the Posthogeschool voor Podiumkunsten.

His artistic practice merges artistic languages in a collective and collaborative performance making. For his latest project, What shines through two different things he develops a situated writing and performance composition interweaving historical and personal events, micro and macro scales of real and fictive landscapes in a
storytelling enriched by choreographic scores.

In 2010 he co-founded the argentine EL CUARTO Theater Company where he worked as an actor, dancer, performer and actors’ coach ever since.
He is co-founder of the argentine artistic activist collective Escena Política, with whom has worked since 2013 in the crossroad of performance and activism.

For his latest project, What shines through two different things, he is interested in the fusion of artistic languages in a collective and collaborative performance practice. Considering the arts as his field of action, he sees art as influential enough to be a relevant element of social change. 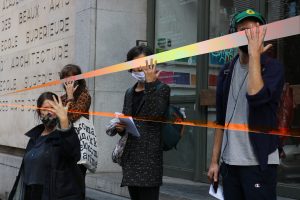 What shines through two different things